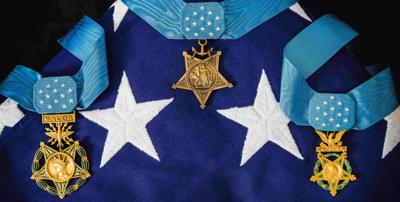 Maj. Dethlefsen was one of a flight of F-105 aircraft engaged in a fire suppression mission designed to destroy a key antiaircraft defensive complex containing surface-to-air missiles (SAM), an exceptionally heavy concentration of antiaircraft artillery, and other automatic weapons. The defensive network was situated to dominate the approach and provide protection to an important North Vietnam industrial center that was scheduled to be attacked by fighter bombers immediately after the strike by Maj. Dethlefsen's flight. In the initial attack on the defensive complex the lead aircraft was crippled, and Maj. Dethlefsen's aircraft was extensively damaged by the intense enemy fire. Realizing that the success of the impending fighter bomber attack on the center now depended on his ability to effectively suppress the defensive fire, Maj. Dethlefsen ignored the enemy's overwhelming firepower and the damage to his aircraft and pressed his attack. Despite a continuing hail of antiaircraft fire, deadly surface-to-air missiles, and counterattacks by MIG interceptors, Maj. Dethlefsen flew repeated close-range strikes to silence the enemy defensive positions with bombs and cannon fire. His action in rendering ineffective the defensive SAM and antiaircraft artillery sites enabled the ensuing fighter bombers to strike successfully the important industrial target without loss or damage to their aircraft, thereby appreciably reducing the enemy's ability to provide essential war material. Maj. Dethlefsen's consummate skill and selfless dedication to this significant mission were in keeping with the highest traditions of the U.S. Air Force and reflect great credit upon himself and the Armed Forces of his country.

The Medal of Honor is the United States' highest award for military valor in action. And while over 150 years have passed since its inception, the meaning behind the Medal has never tarnished. Etched within are the very values that each Recipient displayed in the moments that mattered—bravery, courage, sacrifice, integrity. A deep love of country and a desire to always do what is right.

AWARDING THE MEDAL OF HONOR

The standards to award the Medal of Honor have evolved over time, but the Medal has always stood for actions that go above and beyond. The current criteria were established in 1963 during the Vietnam War.

While engaged in an action against an enemy of the United States;

While engaged in military operations involving conflict with an opposing foreign force; or

While serving with friendly foreign forces engaged in an armed conflict against an opposing armed force in which the United States is not a belligerent party."

All recommendations require thorough reports on the act itself, the battlefield and its setting; at least two sworn eyewitness statements; and any other compelling evidence that can be gathered. Recommendation packets must be approved all the way up the military command structure, ending with the United States President as the Commander-in-Chief.